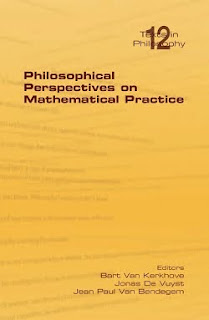 Here’s the description from the backcover:


It has been observed many times before that, as yet, there are no encompassing, integrated theories of mathematical practice available. To witness, as we currently do, a variety of schools in this field elaborating their philosophical frameworks, and trying to sort out their differences in the course of doing so, is also to be constantly reminded of the fact that a lot of epistemic aspects, extremely relevant to this task, remain dramatically underexamined. This volume wants to contribute to the stock of studies filling this perceived lacuna. It contains papers by established, upcoming, as well as beginning scholars, covering general, metaphilosophical themes such as naturalism, semiotics, pragmaticism, or empiricism, next to more specific topics including the unity of mathematical theories, thruth-flow in mathematics, diagrammatic reasoning, erroneous argumentation, or numerical analysis.

The book contains the following essays:
The bibliographical details are as follows:

You can also look it up at Amazon or College Publications.
Posted by Jonas De Vuyst
Newer Post Older Post Home